of the 20th Century 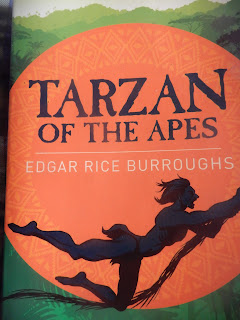 In 1912 Tarzan of the Apes by Edgar Rice Burroughs was first published. This would lead to many a sequel, comic books, a movie serial, lots of motion pictures and an adhesive named Tarzan's Grip after the main character. How many of us, however, have read Tarzan of the Apes to find out what it was like, to be spirited back to 1912, and be  one of those readers who picked up the book for the first time? The thing is we cannot get completely into that mindset, we cannot be exactly like one of the first lot of readers to pick up the book because so much time has passed but we can do our best. Good writing allows us some leverage.
Certain prejudices have arisen against this book over the years. Are, for example, black Africans discriminated against? I would say no because, for every less than perfect black man you have in this book, you have an equally unimpressive white man.
The big difference between the natives and the European types is advanced technology. Burroughs does not approve of European colonization of Africa but understands that it will go on because of advanced technology.
Tarzan, as improbable as he is, can be seen as the great survivor. Did he do so because of his regal family background? Good blood will tell and all that?  Burroughs throws this in as part of the answer to Tarzan coming to, not only live, but also rule over the apes, but only as part of the answer. The love for an ape mother for a child, even a human one, also comes into play.
To the manor born being of some importance is not a view we would take today but, back in 1912, there were still fond memories of Queen Victoria, who passed away in 1901, and the hope that her children would do well for both Britain and the rest of the world. Even in the USA there was that feeling nobility meant something. In 1914 the  death of a minor royal figure and his wife would bring on the First World War.
The book is not perfect. As a teenager Tarzan suffers from wounds anyone would die from without at least receiving some medical aid. Later on a facial scar becomes nothing much because Jane Porter needs to see Tarzan as handsome. Also the ending may not appeal to most readers but you do have to get through the book to arrive there.
How Tarzan learns to read and write does make more sense than the way the creature in Mary Shelley's Frankenstein discovered how to read. Tarzan had pictures to go by and simple, straightforward text meant for someone young and just starting out as a reader. It is understandable that Tarzan cannot immediately relate text, bugs on a page, with speech.
Jane Porter, Tarzan's love interest, might irk some modern readers because she is more representational of the young American woman of the 19th rather than the 20th Century. Also she represents a class of American womanhood that, as far as I know, no longer exists. She has courage but her understanding of life, and also what Burroughs understands, does come from an earlier time in our collective history.
There have been numerous characters created by others, over the years, that owe at least a part of their existence to Tarzan's creation. They include The Phantom. There is also Marvel's Ka-Zar with his sabre-toothed tiger companion and Sheena the She-Devil.
Tarzan of the Apes is short and well paced. It is fit for any library and is part of the history of pulp fiction. Highly recommended. 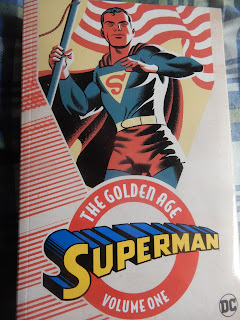 Before the coming of Superman there were numerous costumed heroes with their various skill sets. The Scarlet Pimpernel by Baroness Orczy (1905), through guile, rescued aristocrats from the guillotine during the bloody years after the French Revolution. He was the master of disguise and, built into some of his costumes, were tools and weapons that could be used when he got into a tight spot.
The Phantom (1936), the ghost who walks, the man who cannot die wore a distinctive outfit meant to frighten pirates and other evil doers. The Phantom, created by Lee Falk, remains the only costumed character I know of that is generational. In other words, the role is passed on from father to son. In this way only he cannot die, so long as the line of succession remains unbroken.
Superman stands above the rest as being the first of these costumed heroes with power above that of ordinary men. The others could and were strong in their own ways but not above human. Originally Superman couldn't fly. He merely leapt great distances. He was strong but not invulnerable. His ability to fly and also be invulnerable would come later. The cape and the S were always there but, in the early days, in crude form.
Lois Lane was keen to get out of writing the newspaper pages meant for women and do real reporting. She always had gumption and needed the occasional saving by Superman. Her rivalry as a reporter with Clark Kent (Superman's alter ego) was there from the start. She was always after the big story and this meant big trouble.
Superman, like the Phantom, could be rough on criminals in the first issues of Action Comics and then his own title. His campaign against slums was to tear them down and thus force the city to put up decent housing for all citizens. Would this work in real life? I doubt it but the story did highlight the need for better housing that was a real problem in 1930s and 1940s America.
As war loomed, patriotic American heroes with superpowers, such as the Shield and Captain America, emerged to fight the good fight. As enemies, the Germans were treated slightly better in the comics than the Japanese.
First finding a home for Superman, by creators Siegel and Shuster, was not easy. It was to be an action newspaper comic strip but the newspapers didn't want it. What was then DC took their chances with Superman in the very first issue of Action Comics (1938) and also invested in Siegel and Shuster's detective, Slam Bradley. Both were successful but it was Superman that went on to spawn a couple of movie serials, a radio program, movies, a number of television shows and gave rise to the superhero phenomenon.
Stan Lee and Jack Kirby, when they created the Hulk (man into monster) for Marvel in the 1960s, decided to make him able to leap great distances due to the strength in his legs,  but not be able to fly. Perhaps this was their salute to Seigel and Shuster. 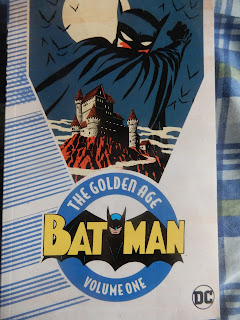 In May, 1939 Bob Kane's The Batman was introduced to the world in Detective Comics 27. The art was crude by anyone's standards but The Batman took off. The character has remained consistently popular with the public ever since and there have been movie serials, movies and television shows. Batman's sidekick, Robin the boy wonder, was introduced in Detective Comics number 38 of 1940. On the cover of this issue there is a tiny DC publications insignia.
The art was improving and so were the stories. Back then the bat-plane could have a machinegun attachment and there were few qualms about villains being killed off. The Batman had gadgets from the start but no superpowers. Characters such as Cat-woman and the Joker slowly came to the fore. Back then it took a while for comic book producers to realize that a colourful bad guy could boost sales.
Marvel's Moon Knight (1975) is somewhat reminiscent of this early Batman.
- November 08, 2021 No comments:

New Life On the South Coast of NSW, Australia

Spring is with Us! 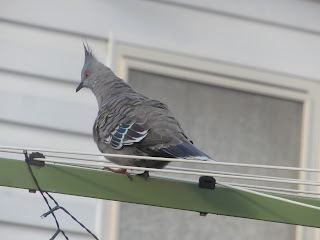 With Spring comes an increase in wildlife and also also the desire of south coast, NSW humans to shrug off winter and get out and about more. Since many of us have had our two jabs that has become increasingly possible. 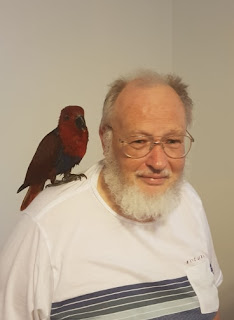 The shops are open for business and I have my government certificate saying I am two jabs bullet proof. I look forward to a meal in a restaurant and visiting friends I haven't been able to see live in a long time. 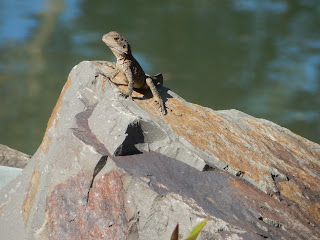 Water Dragons can be found in waterways. This one was located at Towradgi Creek. 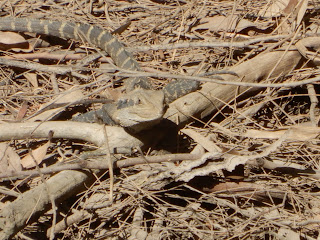 This one was found at a different part of Towradgi Creek.
They may look fierce but they are harmless. 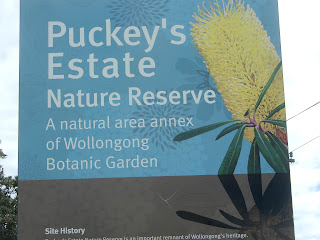 Part of Fairy Meadow and not far from the shops, this is an excellent place to find wildlife including Black Cockatoos. 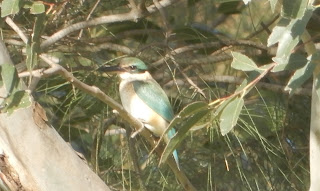 Here we have a Sacred Kingfisher recently found in Corrimal.
They are small and elusive.
Sometimes all you see is a flash of blue indicating they are about.
And sometimes you get lucky. 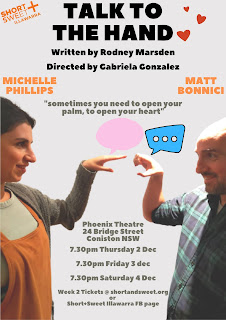 A play worth seeing come December. 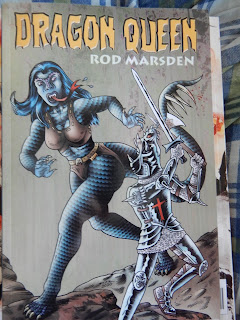 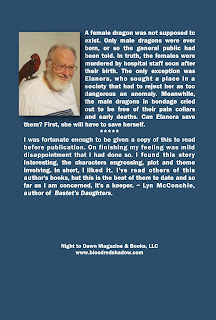 A good holiday read if you like Science Fiction. 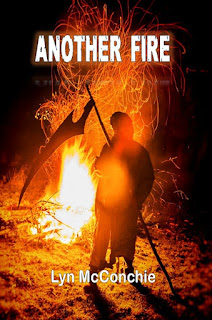 Lyn is one of the best writers around. 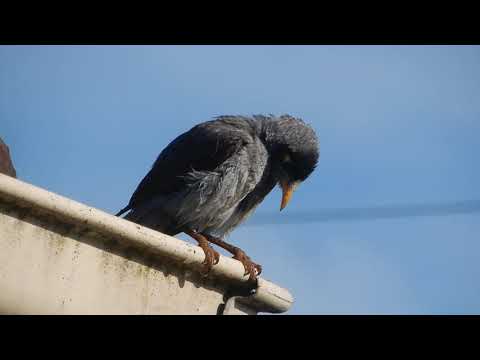 Rod Marsden
I live in the Wollongong area and have been writing for over thirty years. My short stories have appeared in anthologies and I have had a few plays in Short and Sweet.